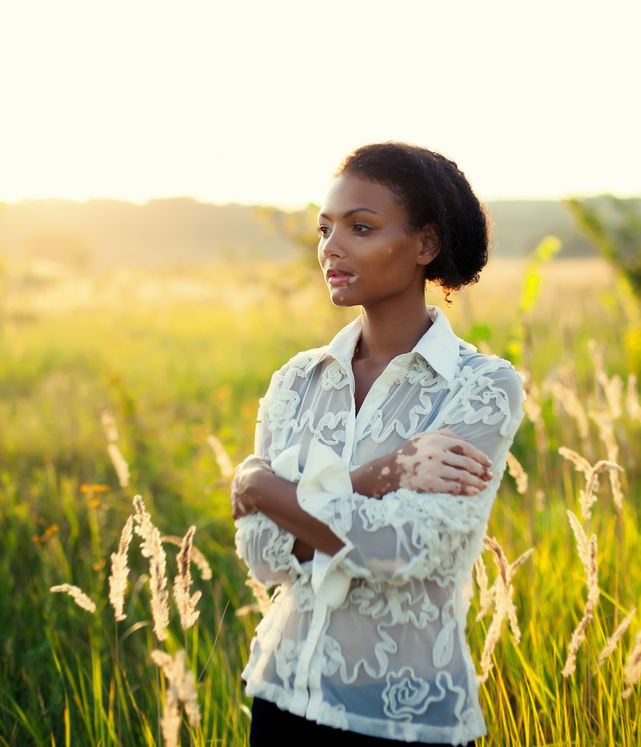 Vitiligo is the most common of the depigmentation disorders. It is an acquired pigmentation disorder of the skin and mucous membranes (moist lining of the mouth, nose, genital, and rectal areas), in which there is a loss of melanocytes or pigmentation. This results in irregular white spots and or white patches on the skin and/or mucous membranes.  If vitiligo occurs in a hair-bearing area, the hair in those areas also may turn white. Vitiligo can develop on any part of the body, including the mucous membranes, the eyes, and inner ears, but typically begins on the hands, forearms, feet, and face.

Approximately 1 to 2 % of the world’s population is affected by vitiligo, equating to 40 – 50 million people. Some reports suggest that the incidence of vitiligo in India, Egypt, and Japan is higher.

The condition occurs independently of age and race, with both sexes affected equally. In approximately half of all cases, vitiligo appears before the age of 20 years, and 70-80% of patients will develop the condition prior to the age of 30.

The Types of Vitiligo

The most common type of Vitiligo is generalized, when affected areas appear in various places on the body.

Vitiligo can be segmental, which is restricted to one side of the body or one area, such as the hands or face.

Other subtypes of vitiligo include focal, mucosal, trichrome, and universal vitiligo.

The Progression of Vitiligo

Sometimes the patches continue to widen and spread, but usually they stay in the same place for years. The location of the macules shifts and changes over time, as certain areas of skin lose and regain their pigments.

The Triggers in Vitiligo

Both genetic and non-genetic factors are believed to be involved in the onset of Vitiligo. Although several theories have been proposed as to the cause of Vitiligo, the precise mechanism causing the condition remains unknown.

According to researchers the exact triggers of the condition vary widely patient by patient, thus making it difficult to conclusively define the primary cause. However, given that autoimmune diseases typically involve interactions between genetic risk factors and environmental triggering factors, the autoimmune theory seems to be the most plausible.

Health Problems which may be Associated with Vitiligo

Although vitiligo is mainly a cosmetic condition, people with vitiligo may experience a variety of problems: