Psoriasis can affect both finger nails and the toe nails (Psoriatic Nails). The percentage of those with psoriasis who have nail involvement is thought to be 50%. For some unknown reason the finger nails are more often involved than toe nails. In most cases people with psoriasis have concurrent nail psoriasis; however, in 5- 10% of cases the nails only may be affected. In one study it was found that the frequency of nail changes in patients with Koebner’s phenomenon was 56%, whereas as in those without Koebner’s phenomenon it was only 29%. Nail psoriasis is approximately 10% more common in males than in females and is positively associated with higher bodyweight.1

Nail psoriasis is characterised clinically by manifestations on the fingernails and toenails. The mean delay of onset for nail dystrophies occurs in individuals with psoriasis between 9 and 11.5 years, explaining the lower prevalence of nail psoriasis in children.2 There may be involvement of only a single nail or of all nails and over time is associated with severe nail destruction or total nail loss. 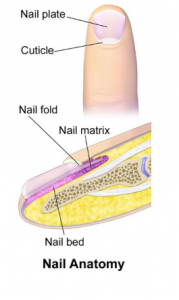 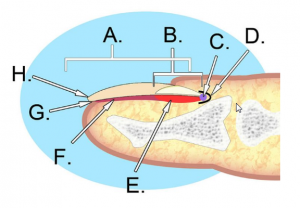 Psoriatic arthritis initially may present with only a few swollen joints. It is often common for just a single finger or toe to be noticeably swollen. Some people feel stiff when they wake up. As they move around, the stiffness fades. Sausage-like swelling in the fingers or toes (dactylitis), pain in and around the feet and ankles, especially tendinitis in the Achilles tendon or Plantar fasciitis in the sole of the foot and changes to the nails, such as pitting or separation from the nail bed are all indicative of Psoriatic Arthritis. More than 80% of patients with psoriatic arthritis will present with psoriatic nail lesions.

Researchers found that the nail and the enthesis (connective tissue – that directly attaches to the bone, via the distal interphalangeal (DIP) joint extensor tendon) are key players in the pathophysiology of nail psoriasis. Specifically, they found that the extensor tendon, at its enthesis, is able to send superficial fibres, which contribute to the formation of thick tissue surrounding the finger bones. This links the dense fibrous connective tissue from the nail plate to the tissue surrounding the finger bones and indirectly to the extensor tendon. The study suggested that there is an association between the DIP joint arthritis and nail disease due to the close interaction between the nail, joint and its associated tendons and ligaments. This is supported by the fact that although the nail system has no neural component, 50% of patients with nail psoriasis observe mild to severe pain and restricted mobility of the fingers.2

Many patients find that it becomes progressively more and more difficult and painful to use the fingers for gripping cutlery, pens and tools and performing tasks such as buttoning clothes, buttering toast, writing, typing etc., which are actions that we take for granted, become tasks that they can no longer do. As well as daily day to day activities many patients find that psoriatic nails also impact upon their sporting activities such as tennis, golf, swimming etc.