Psoriasis is one of the most common immune-mediated diseases world-wide. It is a chronic condition that waxes and wanes. Importantly it is not contagious but it can be an extremely painful, disfiguring and disabling condition for which there is no cure.

The exact causes of psoriasis have yet to be determined, however impairment of the immune system and genetics are known to play major roles in its development. When the immune system is somehow triggered it speeds up the growth cycle of skin cells among other immune reactions leading to a thickening of the skin, inflammation and excessive scaling.1

The prevalence of psoriasis in different populations varies between 0 and 12%, with estimates between 2 – 3% in most western populations. The prevalence in the northern most regions of the Russia and Norway ranges between 5–10% of the population and the highest 12% prevalence is found in the arctic population.2  In the U.S., prevalence ranges from 2.2% to 3.15% and the prevalence among African Americans is 1.3%. There is a low prevalence among North American Indians, Asians and Western Africans (0.3%). In Japan it is 0.1-0.2% of the population, in China 0.3% and is virtually undetected in Native South American Indians.3, 4, 5 Estimates of the prevalence of psoriasis in Australia ranges from 2.3% to 6.6% and in the U.K., the range was 1.3% to 2.6%.4,6  In Australia in the indigenous population it  occur rarely, with two recent Australian studies reporting small numbers of Indigenous patients in both the urban and rural environment presenting with psoriasis.7

What triggers psoriasis is a complex question and a large number of factors are involved. Genes are important: numerous family studies have provided compelling evidence of a genetic predisposition to psoriasis, although the inheritance pattern remains unclear. The condition will develop in up to 50% of the siblings of persons with psoriasis when both parents are affected, but prevalence falls to 16% when only one parent has psoriasis and falls further to only 8% percent if neither parent is affected.8 Environmental risk factors also play a role: bacterial and viral infections, stress, skin trauma, smoking and obesity have all been associated with the onset and exacerbation of psoriasis.9

The classification of severity is based on several dermatological markers. It often is a combination of a PASI (Psoriasis Area and Severity Index) score and a BSA (Body Surface Area) coverage factor.

A PASI score is used by dermatologist to measure the dermatological markers to determine the severity and extent of psoriasis, especially during a clinical trial. Four body areas, the head, the arms, the torso and the legs, are measured according to redness (erythema), thickness (Induration/Infiltration) and scaling (Desquamation) from 0 to 4. (See Chart) 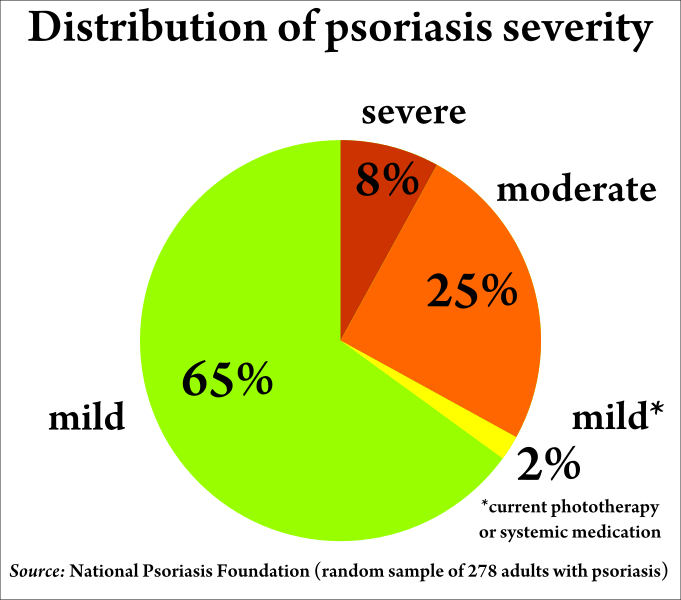 Psoriasis can have a devastating impact on psychological well-being and social functioning, similar to that of cancer, arthritis, hypertension, heart disease, diabetes or depression. Most people with psoriasis suffer feelings of stigmatization because of their highly visible symptoms. This leads to feelings of social discrimination and alienation which compounds the feelings of anxiety and depression.9

Almost 90% of psoriasis sufferers have feelings of shame and embarrassment, 62% feel depressed, 58% suffer from anxiety, 44% feel that they have problems at work with most feeling that they are rejected for promotions, not accepted as part of the work group etc., 42% suffer from a lack of self-confidence due to their self-consciousness and 40% have difficulties in sexual relationships.10

Psoriasis has been classified into several different types10, depending upon presentation, including:-

For more information on each classification of psoriasis refer to posts on each individual type.