is an important but underestimated symptom in psoriasis. However, there is limited published research data available on both its prevalence and characteristics. Some studies suggest that its prevalence in psoriasis sufferers, from different parts of the world, ranges from between 70% and 90%. In one Study Researchers found that 83% of psoriatic patients suffered from itching and in 45% of these patients pruritus was a daily occurrence (in 32% “often” and in 13% “always”) 1

Functional brain imaging studies have shown that the itch-scratch cycle in humans can be tracked to specific regions of the brain, including areas related to reward, pain sensation, and addiction.

The Itch-Scratch-Rash cycle is commonly used to describe this ongoing, never ceasing, always constant itch. The itchier a patient feels, the more scratching of the skin that occurs and which ultimately lead to skin damage and the appearance of a red rash. Often, in chronic presentations it becomes a completely unconscious habit and patients are often not even aware that they are scratching. When a patient scratches, their skin becomes inflamed, this inflammation then causes the skin to itch even more, thus making it even harder for the patient to resist the urge to scratch. This vicious circle can become so severe that it causes sleeplessness, irritability, anxiety and stress. In extreme cases it can lead to significant excoriations (open, bloody and deep scratch wounds) on the lesions and the surrounding normal skin. In chronic psoriasis it can even cause severe lichenification (thickening of the skin) and pain.

One study found that itching was the most frequent complaint (64%) among patients hospitalized for psoriasis. A National Psoriasis Foundation USA survey of its members in 2001, reported that for 79% of sufferers – itch was the second most troublesome symptom after scaling. Psoriasis sufferers have indicated that the severity of their itching on a scale from one to 10 VAS scale (from mild, moderate to severe pruritus where scratched plaques bleed). Most described pruritus (itch) as a sensation of stinging (20%) and burning (15%); the intensity reflected by VAS scale was scored as mild only in 13%, moderate in 37% and severe in 33% of those surveyed. 75% percent of itch patients had to scratch until they bled. Itch was also found to be more severe and frequent at night with 50% reporting difficulty in falling asleep. 2, 3

Itching/Scratching can lead to the hypertrophy (enlargement) of cutaneous (skin) nerve endings, which in turn become more sensitive. For those psoriasis sufferers that have as their Primary trigger, flare-ups caused by the “Koebner Phenomenon” (in which skin injury e.g. tattoos, surgical procedures, cuts, insect bites or sunburn etc. elicits a disease response) scratching can continually exacerbate and worsen their condition. The “Koebner Phenomenon” affects between 11% to 75%, depending on various study results. 4

Where constant and vigorous scratching has occurred and plaque scales have been removed, pin point bleeding, known as the Auspitz sign can be observed. 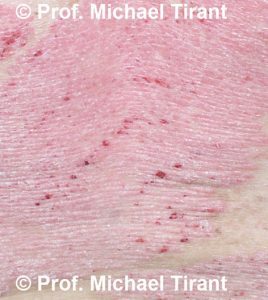 Studies have also shown that in people suffering from depression, and who suffer from itching due to a variety of causes, that there is a correlation between the severity of itchiness and the severity of depression. Itching therefore causes both a real serious physical and psychological suffering, similar to what chronic pain does.5 It has been noted that there is a direct positive relationship between the severity of pruritus and the severity of depression in patients with psoriasis.6 One study revealed that patients with psoriasis, that experienced intense pruritus, also reported significantly higher scores for depression and anxiety, and showed personality traits of somatic anxiety, embitterment, mistrust, and physical trait aggressiveness. It was also noted that approximately 30% of these patients experienced high-level pruritus, when the great majority of patients had very few skin lesions.7

Scratching, even for adults, is difficult to resist because it does give the impression of easing the itch – but this is only for the short-term. Eventually the sensation to itch comes back – even worse that before the patient scratched.

Basic tips to control the urge to itch:-