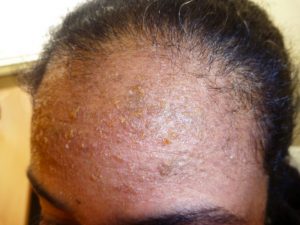 Patients with AD are highly susceptible to certain bacterial, fungal and viral infections.

AD Patients are also susceptible to severe infections caused by herpes simplex type 1 virus (eczema herpeticum or Kaposi’s varicelliform), vaccinia virus (eczema vaccinatum) coxsackie A virus and molluscum contagiosum virus. These viral infections can cause serious complications in AD patient and if not treated promptly have the potential to be life threatening.7

Signs of Secondary Infection include:

The skin is colonized by various different species of bacteria, fungi, and viruses that together are known as the skin microbiome, mainly Corynebacterium spp., Propionibacterium acnes and Staphylococcus epidermidis.

Each person will carry a different combination of these depending upon health and environment. The colonization of bacteria on specific regions on the body depends upon the local skin environment including moisture levels, pH, and keratinocyte cell surface adhesion proteins (Skin Barrier). For instance, Staphylococcus and Corynebacterium species thrive in specific environments on the skin such as the sole of the foot and the back of the knee. Dry environments such as the inside forearm and palm of hand are more prone to harbour a mixed population of bacteria including Propionibacterium acnes. 7

Babies are born microbe free until exposure to the external environment allows for immediate colonization of their skin, this first colonization usually starts as they pass through the vagina. As the child grows and they are exposed to different environments and in physical contact with different people their microbiome will change.7

Environmental factors such as diet, age, and gender also play a role in the makeup of the skin microbial flora.7

In AD patients, when the patient suffers skin barrier breakdown and lowered immunity both S. aureus readily colonizes the affected skin lesions. Studies have shown that between 80% and 100% of patients with AD present nasal and skin colonization by with S. Aureus, as opposed to the prevalence of only between 5 to 30% in individuals without AD. To further break down the colonization statistics S. aureus has been isolated from 55–75% of unaffected AD skin, 85–91% of chronic lichenified (thickened/ scratched) lesions and 80–100% of acute exudative (weepy) skin lesions.7, 8

Impetigo is a skin infection caused by Staphylococcus aureus and Streptococcus pyogenes. In Europe and colder climate regions, Staphylococcus aureus is the most common cause. Impetigo can affect any one but is more common in children aged 2yrs. – 6 yrs. of age. It is highly contagious and is spread by direct contact. Children and those affected need to be kept home from day care, kindergarten, school and work.9 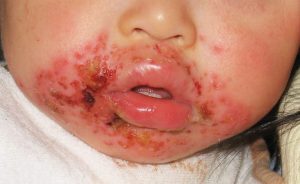 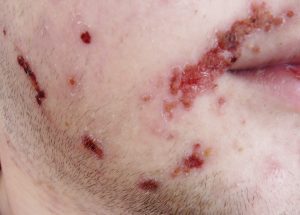 Impetigo is commonly found in people who have skin conditions that cause impaired skin barrier e.g. eczema, scabies, fungal infections or via skin trauma e.g. insect bites. It is also common in crowded environments e.g. schools, day care centres etc. It can be spread through contact sports e.g. wrestling. Impetigo caused by Streptococcus pyogenes is common in hot humid regions.

There are two types of impetigo. The most common is called crusted or non-bullous impetigo. It starts as small blisters, which quickly burst and crust over. The other type, called bullous impetigo, causes large blisters that break easily. It is less common, and mainly affects babies.

Bullous impetigo is only caused by S aureus. 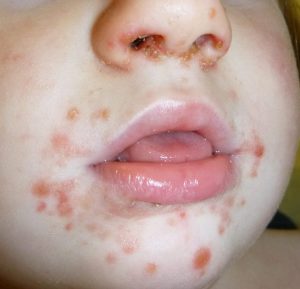 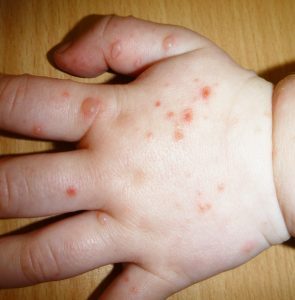 Impetigo has been commonly called “school sores”. It is important, due to the contagious nature of the condition, that hands are washed regularly and especially after having touched or scratched the impetigo lesions. Anything that has been in contact with the sores e.g. clothing or anything that has been on the sores can spread the infection to other family members, friends and colleagues. In order to prevent the spread of the condition it is very important that clothes, towels, pillows and bed linen, nail scissors, razors or toothbrushes etc. are not shared. Clothing, towels and bedding etc. should be washed separately using hot water, washing powder and a disinfectant or eucalyptus/tea tree oil added to the wash.